(Washington, DC) – As part of her budget, Mayor Bowser proposed an innovative Workforce Housing Fund to support the production of new homes that would be affordable to working families, teachers, social workers, first responders, etc. (households earning between 60% and 120% of the Area Median Income or approximately $50,000 to $99,000 for a single-person household and $70,000 to $141,000 for a family of four). On May 14, 2019, the Council eliminated the $20 million dedicated fund and proposed replacing it with a $2.8 million tax abatement for private developers. While Mayor Bowser’s proposal can lock developers into 40-year affordability covenants, the Council’s proposal allows developers to set the policy on affordability.

In response to the cuts, Mayor Bowser released the following statement:

“As we continue to make big investments in programs to support our most vulnerable residents, we must also think seriously about how we insulate middle-income workers, seniors, and families who make a decent salary but are already struggling to make ends meet. With more highly-paid workers coming into the region, an effective housing strategy must consider families across the income spectrum and it cannot be short-sighted – our plan for working families must consider long-time affordability.” 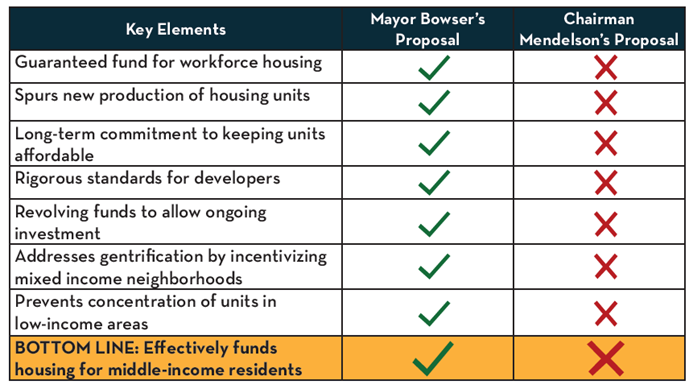 The Council should restore this funding in its final vote on May 28.