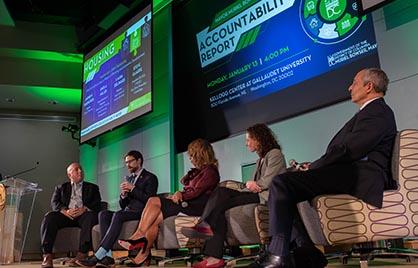 (Washington, DC) – Today, Mayor Muriel Bowser today released her 2020 Accountability Report, a comprehensive look at her Administration’s priorities for 2020 and beyond.

“In 2020, the challenge for all of us – at DC Government and for community leaders across the District – is to continue building a DC that is inclusive and diverse, a DC filled with opportunity,” said Mayor Bowser. “We have a lot to be proud of, but also a lot left to accomplish. We have housing to build, jobs to create, an environment to protect – and none of it can wait. I’m fortunate to have a strong team at my side, ready to tackle these issues with a sense of urgency, and to lead a community always ready and willing to get involved and support their neighbors.”

The report outlined areas the Bowser Administration has prioritized for her second term. Highlights from the report are included below.